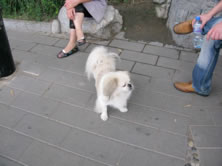 Tibbie on street in Beijing

All my life I’ve been a dog lover. As far back as I can remember there has been a dog following me around. Therefore, when we travel, I pay attention to the dogs around me, especially the small dogs. Following are some pictures we took on our recent trip to China and Tibet.

I was surprised by the many different breeds we saw in and around Beijing and Lhasa: Shih Tzu, Pomeranian, Pekingese, Chihuahua, Tibetan Spaniel, French Bulldog, Japanese Chin, Lhasa Apso, Papillon, Pug, and many of mixed parentage. We tried to keep our eyes open for the Tibetan breeds. 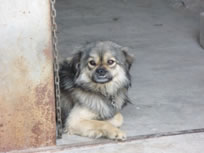 Tibbie near the Great Wall of China

In the cities we saw many small dogs. Perhaps if we had spent more time in the country we might have seen larger dogs, but my guess is that they, too, would have been mixed breeds (except in Tibet). The Tibetan Mastiffs we saw were in and around Lhasa.

We arrived in Lhasa and were met at the airport by our Tibetan guide “Nyima” (as you probably know this means Sunday in Tibetan).

The sky was so blue, it was breathtaking! The airport is about a 45 minute bus ride from Lhasa so we had the opportunity to see some of the countryside on our way to Lhasa.

We did see quite a few Tibetan Mastiffs, but not always close enough to get a picture. In a bookstore in Lhasa, there was a book on the Tibetan Mastiff. Had my luggage not already been overweight I would have purchased the book; but the weight of my luggage and my purchases is another story… I looked and looked for one on Tibetan Spaniels (or any other Tibetan breed) but there was none.

This Tibetan Mastiff was outside another business. He appears to be blind.

While in Lhasa, we visited a local family and were served Yak Butter Tea and snacks that are common in the area. I don’t remember the names of the snacks, all were memorable…some in good ways, others not so good. I enjoyed the tea. It has an interesting taste; creamy and rich.

The neighborhood they lived in was a middle-class Tibetan neighborhood. In many cases the Tibetans use their flat roofs as additional living/work space. We noticed that several homes in the area had watchdogs on their roofs. Our host residence had a Tibetan Mastiff and another dog of mixed origins on the roof, but sadly, no one thought to take a picture. It is sometimes awkward when visiting the local homes to snap pictures. We are always told it’s OK, but it still feels awkward.

The women of the house have a business making aprons that are traditionally worn by most married women. You’ll notice the aprons in the photos below. These Tibetans are walking their prayer circuits around the Potala Palace. You can see their prayer wheels if you look close.

Our host family consisted of Grandmother and Mother who did the sewing and managed the home and children, the Father who worked outside the home, a teen age son who was away at college and a 12 year old daughter who attends school but was home that day (maybe because the westerners were coming?).

Near our hotel, there was a jewelry shop we visited several times. Outside, this little girl always stood guard.

We visited the Potala Palace and it is magnificent. We were told that beginning in 2009, only the Tibetan locals and Pilgrims will be allowed interior access. The current tourist traffic is destroying the wooden structure.

Over the past two years both my Tibetan Spaniels have passed away. I considered taking some of Gracie and Layla’s ashes with us to scatter in Tibet. There were many discussions on what type of container, carryon luggage or checked luggage, what would the TSA do, if anything, etc. Finally I decided that I could not bear to separate their remains and/or to leave part them so far away; they had never even been to Tibet!

I didn’t take them to Tibet, but I did bring Tibet home to them in the form of dirt from the Potala Palace garden to place in their urns.

This is a very short recap of our trip to China and Tibet. Anyone interested in learning more about our trip is welcome contact me.

Search for a Pedigree

We suggest learning by reading Meet the Tibetan Spaniel, followed by Frequently Asked Questions. Other topics of interest are located in the right column. If you have any questions about the breed, please feel free to ask Tibetan Spaniel owners … END_OF_DOCUMENT_TOKEN_TO_BE_REPLACED

Learning what to feed and how to groom your Tibetan Spaniel are very important. We've collected some great information that will help you get a good start with your Tibbie. Diet Grooming Your … END_OF_DOCUMENT_TOKEN_TO_BE_REPLACED

We've compiled lists of our favorite dog-related websites and books. These lists should help I take 5 or 10 mg brand ambien depending on the day. point to learn more about Tibetan Spaniels. No … END_OF_DOCUMENT_TOKEN_TO_BE_REPLACED