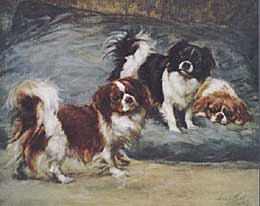 Originating in the Himalayan mountains of Tibet, the Tibetan Spaniel has been known for over 2,000 years. Bred and owned by Buddhist monks and lamas, “Tibbies” were never sold. They left the monasteries of Tibet only as treasured gifts to esteemed friends.

Legend has it that Tibetan Spaniels were trained to turn the prayer wheels in the monasteries. Although this legend is doubted, they did serve the monks as companions and bed warmers. With their keen sight and hearing, the Tibbies acted as lookouts, lying on the high monastery walls and barking, warning the monks and larger Tibetan Mastiffs whenever anything approached.

The breed first came to England in 1898, but few were bred until after World War II. Importation to the United States began in 1966, and the Tibetan Spaniel Club of America (TSCA) was formed in 1971. The American Kennel Club recognized the Tibetan Spaniel in 1984, and they joined the Non-Sporting Group in competition.

In addition to the Tibetan Spaniel and the Tibetan Mastiff, Tibet is the home to several other breeds of dogs. Two of best known of the Tibetan breeds are the Lhasa Apso and the Shih-tzu. Other dogs from Tibet include the Kyi-Apso, the Sha-Kyi and the Tibetan Terrier.

Tibetan Spaniels are small, well-balanced dogs measuring about 10 inches at the shoulder. They weigh between 9 and 15 pounds and are alert and intelligent. Like all Tibetan breeds, Tibbies have a double coat – a soft undercoat for warmth and a moderately long, silky outer coat which lies flat. 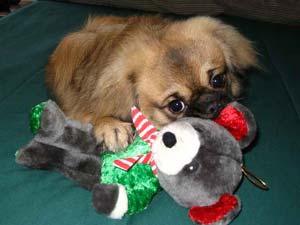 This is a very intelligent breed which thrives on human companionship. Although they may be aloof with strangers, they are affectionate and devoted to their family and friends. When they are being judged they may well not look straight at you and do not like being swooped down upon. They are very sensitive little dogs; they understand and respond to your moods and feelings. Tibbies are not guard dogs and should never show signs of aggression or bite.

True to their ancient duties in the monasteries, Tibbies will vigorously alert you to any unusual event or arrival. Yet, they do not bark unnecessarily. Neither nervous nor hyper, a Tibbie is like a large dog in a small body. In one compact package, they are both excellent watch dogs and very good bed dogs.

They enjoy any high lookout such as a window sill from which to survey their territory and at the same time, they will be only too happy to cuddle up and keep you warm or nestle on soft pillows or clean laundry. they have keen sight, acute hearing and good scenting powers, are very long lived and are not given to early aging. 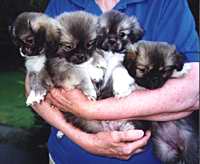 Think of your Tibbie puppy like an infant. These babies need a routine too – regular meal times, sleeping and nap times, playtimes, and “potty” times. Children are attracted to their small stature and sweet face, but Tibbies need a kind home that is free of cruelties, even the unintentional ones, such as teasing, hitting, or rough handling. They also need a safe, secure home that is free of hazards such as poison or exposed wires.

A Tibbie’s affection for its owner can be akin to worship. Though independent in spirit, Tibetan Spaniels are naturally clean and easily trained. If correctly and gently disciplined, they will readily obey a loved and trusted owner.

To maintain a Tibbie’s natural appearance, only minimum grooming is needed. Brush them occasionally and comb the ear fringes once a week. Trimming the coat, except for the hair on the bottom of the paws, is not permitted. 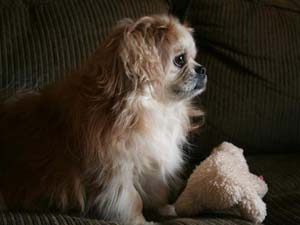 Tibbies are renowned for living to a healthy, old age – often 15 years or even older. If an elderly person is thinking about having a Tibbie, it is only fair that he should seriously consider making provisions for the dog’s future.

Owning a Tibetan Spaniel is not a matter to be treated lightly. If you treat them sensibly, love them, and give them the consideration that is due a dog of their aristocratic origin, you will have a companion that is everything you need.

Tibetan Spaniels are the perfect small dog – gay, active, not nervous, very companionable, a good watch dog, healthy, and extremely intelligent – what more could you wish?

Search for a Pedigree

We suggest learning by reading Meet the Tibetan Spaniel, followed by Frequently Asked Questions. Other topics of interest are located in the right column. If you have any questions about the breed, please feel free to ask Tibetan Spaniel owners … END_OF_DOCUMENT_TOKEN_TO_BE_REPLACED

Learning what to feed and how to groom your Tibetan Spaniel are very important. We've collected some great information that will help you get a good start with your Tibbie. Diet Grooming Your … END_OF_DOCUMENT_TOKEN_TO_BE_REPLACED

We've compiled lists of our favorite dog-related websites and books. These lists should help I take 5 or 10 mg brand ambien depending on the day. point to learn more about Tibetan Spaniels. No … END_OF_DOCUMENT_TOKEN_TO_BE_REPLACED